An Autism Journey Through the Eyes of Derrick Airhart, An Autism Dad 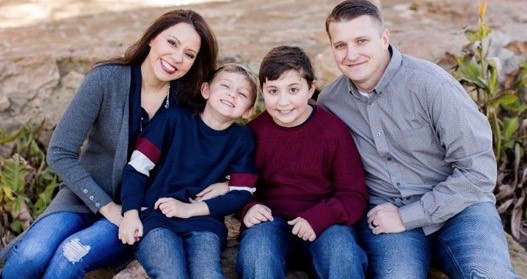 I still remember the day my wife and I sat in the screening room at Texas Children’s. They had us sit in a room with monitors and observe our son interacting with a specialist in the other room. Our hearts began to sink in those few moments as we could see that something wasn’t right. Two weeks later, we received the diagnosis our son was on the autism spectrum. This was eight years ago, but I can remember it like it was yesterday. As a father, I wanted to fix it. I learned quickly this would not be something that I could fix. In the years since his diagnosis, we have learned so much about autism. The more we learn, the more we realize how much we still don’t know.

The biggest challenge I have faced as a father of a child on the spectrum is routine. Children on the spectrum thrive on routine. Routine was a challenge in the beginning because I have always liked the ability to be spontaneous. Over the last eight years, the routine has become our best friend. He is at his best when he knows what is coming. We build our days around his routine. I have now become quite accustomed to living this way. What once was an issue for me has now become part of our daily lives.

I remember when he was diagnosed, I was overwhelmed with all of the things he wouldn’t get to do. There was a grieving process I went through as his father. I can still drive by little league fields and get emotional thinking about what could have been. The plans I had for my son when he was born to have been changed. I used to struggle with that fact. Now, as I have lived this autism journey for the last eight years, I have seen so many amazing things I would never have imagined. Being an autism dad isn’t easy. It is hard. All I could see eight years ago were the
limitations my son would have. Eight years later, I am blown away by what my son has accomplished.

He won the most improved student in his school last year. He made friends with peers. He can take you on the most efficient tour of the Houston Zoo, and he will tell you everything about the animals and their habitats along the way. Animals have always been his biggest passion, and he tells everyone that he will own a zoo one day. I have learned not to doubt him. My biggest fear is the future. I often find myself wondering what will happen when I am not here anymore. I have been his best friend since the day he was born. I know what he needs to thrive. As his father, it is tough to think about what his life will be like when I am gone. As a man of faith, I know God will take care of him. I know God loves my son far more than I ever could. My son has brought so much joy into our lives. We get to see miracles almost every single day as he does things he wasn’t supposed to be able to do.
Autism changed our lives eight years ago. When I look back over the last eight years, I can honestly say autism has made me a better father and husband. Autism has made me a less selfish person.

I am thankful for Hope For Three. It has allowed me to become friends with other dads who are living the autism journey. If you are an Autism dad and you find yourself struggling, I encourage you to get connected to our guy gathering meetings every month. We hang out and have conversations. There is no real agenda other than a few laughs and supporting each other. These gatherings are great because you will realize that you aren’t alone. I have met some fantastic guys in these gatherings that have become great friends. Autism can be very isolating, so I challenge you to make an effort to connect with other dads who can help you, and you can help them. We are in this together!

Guy Gatherings are held on the third Tuesday of each month. All male caregivers of a loved one with an autism spectrum disorder, or special needs child, are invited to attend. Due to the Coronavirus Pandemic and until further notice, Guy Gatherings are held via Zoom. For more information, contact Samantha Katchy, samantha@hopeforthree.org

There are no upcoming events at this time.