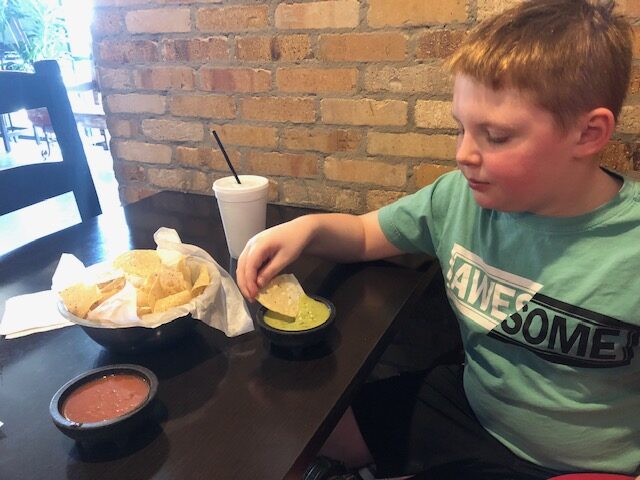 Meet 10-year-old Drew Smith, Hope For Three’s spectacular September Autism All-Star. Drew is a very friendly, happy, and affectionate young man who enjoys playing games on his iPad, watching Sid the Science Kid, and swimming in his family’s pool. Drew has mastered the iPad so well that his parents recently had to change their Amazon password as he figured out how to purchase all of his favorite games, toys, and shows! He loves animals and is learning to help with chores including taking care of his puppy Sadie.

At 2 years old, Drew was diagnosed on the autism spectrum with mainly social and speech delays. Tim Smith, Drew’s father, explained that he and his wife, Nicole, knew that the challenge of autism would be something to embrace. “We always tell people it is the biggest blessing and the biggest challenge at the same time. Although you would never wish for it, it has been a challenge that has developed more patience with us and our families,” said Tim.

When Drew was initially diagnosed, he was on a waiting list for Applied Behavior Analysis (ABA) Therapy for several months. Eventually, he was able to begin fulltime ABA therapy and the Kindergarten Bridge Program. Tim and Nicole were thrilled to see Drew’s development and progression in language skills, basic instructions, and completing tasks. Drew now attends The Westview School, a private non-profit school for high-functioning children with autism.

When Covid-19 began, schools mandated online learning for students so Drew continued with the use of academic tutoring. He also maintained his normal therapies and enrolled in additional Speech and Occupational Therapy sessions. Over the course of this summer, he completed intensive academic enrichment. Through his relentless hard work and dedication Drew advanced to the third grade.

Drew and his family live by the rule, “You can do anything if you just put your mind to it. Maybe not now, but that just means not yet.” During these challenging times, he has been unstoppable excelling beyond the expectations of his teachers, therapists, and family. This is what makes Drew an Autism All-Star!

There are no upcoming events at this time.