Meet Eric Murdock, Hope For Three’s miraculous May Autism All-star. Eric was born severely premature at just 26 weeks. He weighed 1 pound 3 ounces and was only 13 inches long. He spent the first three months of his life in the NICU before being released to go home with a breathing machine and had countless doctors’ appointments. Once Eric started growing, his parents noticed significant developmental delays such as banging his head on the floor, stimming, and not talking or walking at the typical ages. After a battery of tests, Eric was diagnosed with autism at three years old.

After his diagnosis, his parents, Tanya and Jevaughn Sterling hired a speech therapist to teach him to sign. After a few sessions, she let them know that Eric was not trying to learn sign language; he preferred to be verbal! At 24 years old, he is a graduate of Clements High School and has grown into a very verbal and extraordinarily social young man. One of Eric’s “hidden talents” is that he knows how to read. However, no one knows how he learned to read. Special Education taught him phonetics but, at some point, he took himself out of reading phonetics and began reading entire words. Specialists believe he taught himself how to recognize entire words. Another one of his talents is listening to EVERYTHING and understanding and comprehending conversations that most would not think possible.

Eric is the proud older brother to siblings Leah and Ryan, who adore him. He and his family are very social and are often involved in their community. They attend River Pointe Church in Missouri City, where Eric truly enjoys worshiping and singing. He also enjoys traveling, reggae music, dancing, and he LOVES popcorn! Some of his hobbies include playing soccer, playing golf, and playing special needs baseball with First Colony Dream League.

His mother, Tanya, says that she is forever grateful for Eric and the incredible impact he has had on the lives of his family and friends. His family celebrates the unique individual that he is each day, even when his behaviors are challenging, and they would not have it any other way! They have never treated him any differently than his siblings. Because of Eric, his family members and friends say that they are more attentive to special needs children at school and in their communities.

No matter where he is, even if he is unfamiliar with his surroundings and with some people, Eric is pleasant, polite, and eager to interact with others. He is always up for an adventure, and he has never met a stranger. His demeanor enables people, especially those who are not used to being around people with special needs, to be immediately at ease. They all gain an affection for Eric and, in turn, individuals with special needs. Eric is an All-Star because his very existence has had a rippling effect on every life he encounters. 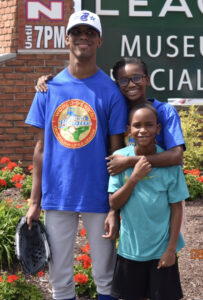