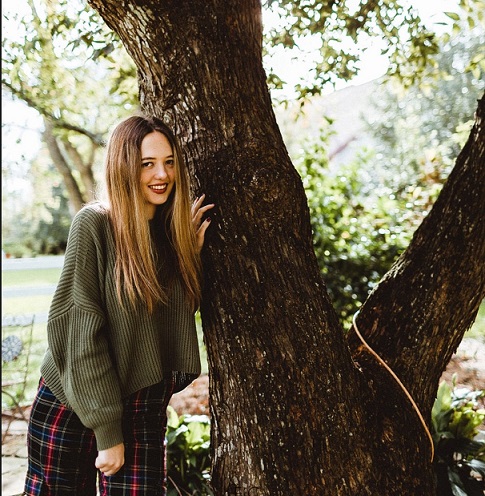 Meet the beautiful and talented Miss Georgia Moore, Hope For Three’s June Autism All-Star! Georgia’s true passion is volunteering and advocating for the autism community which scratches the surface of who she is.

At the age of 2 Georgia was diagnosed with PDD. Growing up it was often difficult for her family to find the right services for her as she is so high functioning on the spectrum. Georgia was switched from public school to a very small private school, Logos Prep Academy. There she was able to take classes with fewer students and that had less stimulus. They also allowed her to do her work from home a few days a week. She thrived at Logos Prep and has recently graduated Class of 2020. She plans to attend Houston Baptist University in the fall where she will study psychology and obtain her BCBA license so that she can continue to work with children, especially teenagers, with autism.

Georgia has been advocating for the autism community specifically since 2015 when her mom, Brynn Scally, started a company called Spectrum Yoga where they offered classes that teach yoga to children on the autism spectrum. Brynn said, “I got to really observe Georgia take charge, in a way that only a peer can, of making sure everyone felt loved, included, and understood.” Georgia then discovered Hope For Three and became a volunteer in Teen Huddle whose mission is “To increase autism awareness and acceptance among teens.” Samantha Katchy, advisor of Teen Huddle, described Georgia as follows; “Georgia is a wonderful example to teens as well as the community for her determination, courage and brilliance. She has been committed to spreading awareness of autism and continues to do so in so many ways. She is hardworking, reliable, communicates clearly, is responsible and detailed oriented. She is an example and a compliment to her peers. She is always available to work with others, help others in various situations and her peers can depend on her. Georgia is a great role model to her peers especially as a member of Teen Huddle.” Georgia said that being a part of Teen Huddle has forever changed her because it allowed her to grow as a person and build loving and lasting relationships. Recently Georgia’s family started a local autism clinic, Apara Autism, where she has been instrumental in volunteering her time each week to engage and form genuine bonds with the students. She also volunteers her time outside the clinic to write the students letters and make them each feel special.

Georgia enjoys writing, filmmaking, and photography because they allow her a platform to creatively share with others. In 2018 she wrote and published a documentary about her own journey on the autism spectrum that was accepted into the Texas high school portion of South by Southwest. She plans to continue her film work and focus on the documentary genre, highlighting injustice and showcasing things that others should see, just as she’s always done.

Described by those that know her as a living example of how to truly be kind with an unwavering loyalty and a staunch dedication to justice and fairness. She has a strong code of ethics regarding inclusivity and boldly stands up for others in both her words and actions to ensure that everyone that she meets feels included, understood, and loved. This is what makes Georgia an Autism All-Star!!