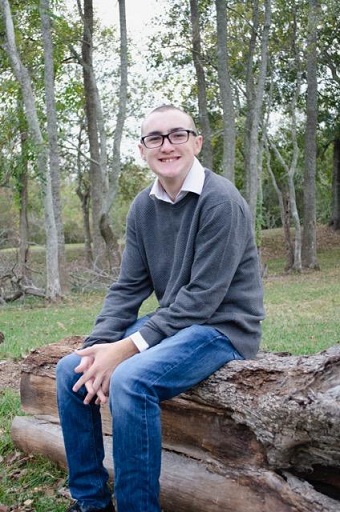 Meet Grant Zollinger, Hope For Three’s March Autism All-star, with a heart as big as Texas!He always has a smile on his face, enjoys riding his bike, spending time with family and friends, and watching college football, especially the Aggies.

Grant was born in 2002 in Bryan, Texas. He is the oldest of four children, has two younger sisters, Ashlyn and Sadie, and a younger brother, Brady. His family is extremely close; they enjoy traveling together and supporting one another’s extracurricular activities.

Grantis a senior at Thompkins High School in Katy, where he will graduate in May. He has been a member of the school marching band for the last four years and earned his letter jacket and “Band Member of the Week” this year. Classmates recently nominated him for Class Favorite and Most Spirited. Grant aspires to attend Texas A&M University and has applied for acceptance in the Aggie Achieve program.

Grant was first diagnosed on the spectrum at 2 ½ years old after his parents observed that he was not interested in playing with peers his age and was not talking. He was able to start attending Speech and ABA therapies that helped his growth and development tremendously. With the love and support from his family, Grant has thrived ever since
Grant has accomplished so many wonderful things in his life, including becoming an Eagle Scout at 16.His mom’s very favorite accomplishmentis when he organized and managed a bike race all by himself for The Brookwood Community, a non-profit organization dedicated to helping adults with disabilities. It was their most successful bike race to date!

Grant is a strong leader who continually hasa positive attitude and brings joy to everyone around him. He is dedicated to encouraging others, is always happy, and remains relentless in his desire to help those in need. His outstanding attributes are what make Grant an Autism All-Star.