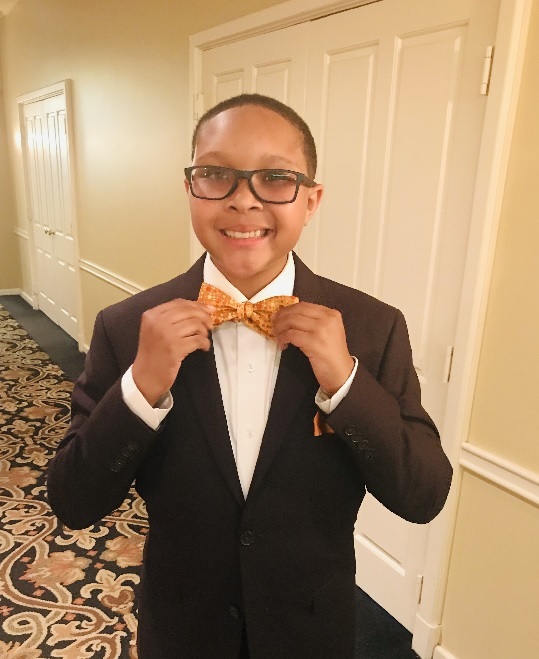 Meet the charming and debonair Marshall Jones, Hope For Three’s October Autism All-star with an out of this world personality!! He loves puppeteering, drawing cartoons, eating pizza, wearing eye patches, and dressing up! He is extremely affectionate and has a delightful sense of humor!!

Marshall lives with his mom, Lynn Clouser, and younger sister, Lauryn. When Marshall was 3 years old, Lynn noticed that his fine motor skills were delayed. He was not speaking at the same level as his peers, and he would not walk. She could get a referral to Texas Children’s hospital, where Marshall was diagnosed on the spectrum. Lynn enrolled him in Occupational & Speech Therapy and The West View School, where he was able to obtain outstanding opportunities in academics and social communications.

Marshall is now 15 years old and a freshman at Launch Academy in Sugar Land, TX, where he has been a student since the 7th grade. He has made many friends and is thriving academically. His favorite class is math, and he was awarded the “Most Improved Math Student” last year. Marshall’s teachers characterize him as an exceptionally hard worker who is always motivated to learn. He is in the band and has been playing the drums and keyboard for a year. Marshall also takes a class at the Launch Coffee Shop, where he has learned to cook eggs, pancakes, and prepare lattes. Last year Marshall was interviewed by Haley Hernandez with Channel 2 News on World Autism Day, where he prepared her a latte and discussed his love for fashion.

When Marshall was in 3rd grade, he started wearing bow ties every Wednesday, which came to be known as “Bowtie Wednesday.” He would often compliment church members on their ties, and they would frequently give Marshall the tie they were wearing. He became such a fan that he started collecting bowties, ties, ascots, and cuff-links. He also learned to tie a bowtie at age 10. He has impeccable taste and loves to dress up in a sports jacket or one of his custom-tailored suits. His taste is inspired by his love for old classic movies and such legendary greats as Fred Astaire, Gene Wilder, Jim Henson, Gene Kelly, and Frank Sinatra. In his school talent show, he performed “Singing in the Rain” by Gene Kelly and “My Way” by Frank Sinatra.

Truly a man of many talents, Marshall aspires to be a puppeteer when he grows up. His favorite puppets are arm-rod and live hand puppets. He currently has four puppets and has taken sewing classes to make his own puppets in the future. To improve his skills, Marshall takes puppetry lessons from Aretta Baumgartner, the Education Director at the Center for Puppetry Arts and President of, Board of Directors Puppeteers of America. Marshall is also talented at doing impersonations such as Porky Pig, Bugs Bunny, and Yosemite Sam.

Marshall is resilient, hard-working, remarkably dedicated, and truly passionate about life; this is what makes him an Autism All-star!!