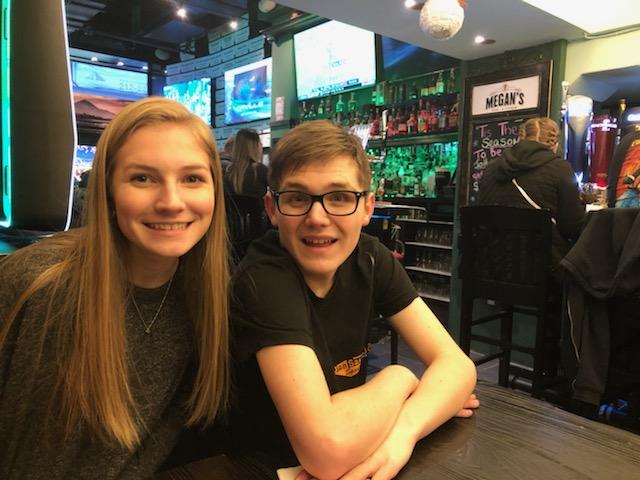 “Why do you care? He’s too retarded to do anything about it anyway.”

The freckled face that stared back at me was adorned with a smug look. The look of a winner. The look of someone who knows but does not understand. A person who realizes but refuses to accept. I could feel the other kids on the bus staring as well, as conversations quieted, and snickers disappeared. Overwhelming rage, aggression, and anguish begged me to punch the face squarely in the nose. I could already imagine the satisfaction of a detention well-earned. My younger brother, who stood next to me in the aisle of the bus, looked at me in utter confusion. His eyes were full of fear, as though he could see the anger inside of me. It was when I saw his face that the world resumed, and I marched off of the school bus. I walked home with my brother trailing behind me, too confused to say anything.

Looking back, I cannot remember when I was first told that my brother is different. I don’t know when the word “autism” first graced my vocabulary. It was ever-present, though, the fact that my brother would require more attention from the adults in our lives than I do was not. Autism Spectrum Disorder is a developmental disorder that usually appears in children at a young age. This disorder affects the social and cognitive aspects of a person’s life, and there is no known cure or method of prevention. My brother’s differences meant growing up with different rules than other children, many of them self-taught. I learned not to laugh at the tantrums thrown over small things, because ignoring them or pretending they were funny meant heads being slammed into walls repeatedly and tongues being bitten until they bleed. I knew that hand flapping meant excitement but blushing meant anger, and sometimes you just need a long, tight hug to be yourself again. Being understood by others is a privilege randomly given to most, and understanding others is a right you have to work to earn. I learned that you cannot expect to be handed anything, but in some cases, a lifetime of effort is not enough to achieve the goals that society sets for you.

Combatting the stigmas surrounding social and developmental disorders has been one of my main focuses through adolescence, and I aim to continue this battle for equal opportunity into adulthood. One way I have attempted to do this is through the creation of a club in my school, Students of Quality United in Accepting Differences, or SQUAD. SQUAD is aimed at integrating the special education population of students with the rest of the student body. This club focuses on creating activities for the enjoyment of all students such as dances and fundraisers while avoiding sensory overloads and abrasive environments. Many of my fellow classmates have expressed interest in SQUAD and what we have to offer, and although this club does not reach farther than the population of my school, I am sure that we make a difference in the lives of those involved.

Change starts at the bottom. Saying a hurtful word is unlikely to cause damage, but the same hurtful word repeated by thousands of people can have disastrous effects. The simplest changes in one’s lifestyle can lead to change that sends shockwaves of understanding across the world, but we as individuals have to be willing to make these small changes. People like my brother deserve to be understood and accepted for who they are, not written off. We can understand, love, and include all if we are willing to stop our current practices of ignorance.

The author of this incredible piece, Ann Horton, is the sister to Tyler who has autism. She wrote this essay in high school. The assignment:

“Describe a problem you’ve solved or a problem you’d like to solve. It can be an intellectual challenge, a research query, an ethical dilemma-anything that is of personal importance, no matter the scale. Explain its significance to you and what steps you took or could be taken to identify a solution.”