The “Up and Coming” Therapy 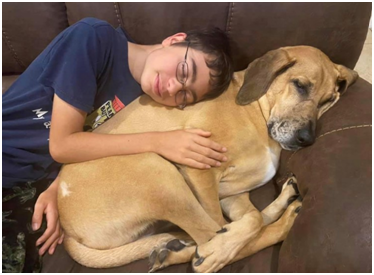 Many “up and coming” therapies, “cures,” and suggestions to handle or aid in Autism Spectrum Disorder (ASD or autism) have shown face in the last several years. Though most are bogus and unproven to work, one therapy has shown very promising results recently, Animal Assisted Therapy (AAT)! Animals have been revolutionizing the medical world for decades, lowering blood pressure, guiding the blind, hearing for the deaf, but can they curb the “problem behaviors” individuals with autism have?

Well, the answer is absolutely! Before we can discuss the effectiveness of AAT, we must uncover why this therapy is proving to be promising for those on the spectrum. The fascinating thing about ASD is that many individuals affected do not have a social aversion towards animals. This may be due to the Human-Animal Bond, a mutually beneficial relationship between humans and animals. This type of bond allows for both human and animal well-being to be improved and supported. Improvement’s individuals affected by ASD are experiencing can be attributed to this bond; from increased social satisfaction to self-regulation and empathy, the human-animal bond has no limits. The limited research performed on AAT is disappointing, but the potential of this therapy is thrilling. The trials performed on individuals with autism have determined that AAT can allow a person to feel social fulfillment, maintain motivation (as animals tend to be the common motivator in AAT), calm sensory sensitivity, and build confidence.

It is understandable how apprehension can arise regarding a new therapy for autism, especially one that has not been empirically, or observationally, validated just yet. However, the possibility of having a new door opened for individuals affected daily by social aversions, sensory overloads, and anxiety is very exciting for the community!
Below is how one unique animal impacted the lives of Noah and his family:

Noah was diagnosed with autism at four and began homeschooling at nine. A lack of supports in the school systems and the inability to curb his social and sensory aversions at the time made this necessary. Noah is a true story on how subject to change ASD can be and how animals can aid in changing kids affected by autism for the better!

About three years ago, Noah and his family received a Great Dane mix named Chuck. Chuck ultimately became Noah’s best friend, talking to him about his day, transformers, and hugging him when Noah needed one! Noah found that it was easier to talk to dogs because Noah feels that “Dogs understand me better than people.” Taking this bond and running with it, Noah’s incredible mother, Andrea, noticed the value of animals to the ASD community! Since adopting Chuck into their family, Noah has begun conversations with people about his best friend and asking others about their best friends too! Noah is now able to communicate due to practicing commands and conversations with Chuck effectively. Inspired by Chuck and Noah, Noah’s family started a dog and cat treat/food business, PetWants! Andrea shared, “Starting this business has made such a positive impact on Noah, especially since he is so keen on starting up conversations with customers about his dog and theirs!”

Now 15, Noah continues to improve in social aversions and self-regulation daily. Like anybody else, Noah has good days and bad days, but Chuck has made the bad days much better!