From everyone at Hope For Three, we would like to wish the happiest of birthdays to our August Autism All-Star, Titan Henderson! Turning three years old on August 15th, Titan has grown tremendously in the (nearly) one-and-a-half years following his autism diagnosis. 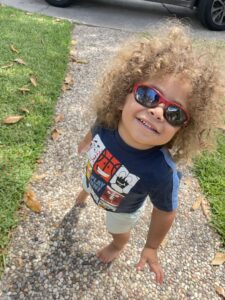 Titan loves swimming, finger painting, Toy Story, jumping on the trampoline, and playing with trucks! He is very active, and one of his favorite games/sports is soccer and kickball! He loves kicking the ball so much that his big brother, Eric, is teaching him the sport of soccer. Keep an eye out for Titan as the next Houston Dynamo player!

This feat would not be too remarkable, for Titan has proved to everyone that a diagnosis is … a diagnosis! Titan does not let his autism diagnosis stop him. Although shy at times and unable to speak verbally, Titan continues to communicate his wants, feelings, and needs. This ability and determination have led him to pick up American Sign Language quickly and he can (now) speak a few words because of Speech Therapy. Newly enrolled in his therapies, Titan has already surpassed his goals and continues to thrive! His mom, Stephanie’s favorite accomplishment of her son, is his acquired ability to sign daily. Though he sometimes becomes frustrated trying to find the right words to sign, he still manages to pull through and 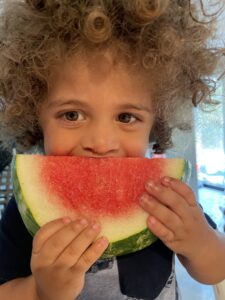 Titan has a beautiful support system of four siblings and two parents. Stephanie (Mom) and Perry (Dad) have a total of five kiddos: Eric (12), Sebi (11), Sayla (8), Titan (3), and Ramona (2). Titan and Ramona are exactly ten months apart! Titan’s parents feel blessed to have helpful and understanding children. Their family, along with many others in the autism community, work as a unit every day to love, care for, and be supporters and advocates for Titan, and many others. His infectious laugh, golden (untouchable) locks, and sweet personality make the little extra care worth it. Titan’s ability to progress, adapt, and thrive with new therapies is what makes him Hope For Three’s Autism All-Star.

Do you know someone diagnosed with autism who is an All-Star? Click HERE to nominate them!