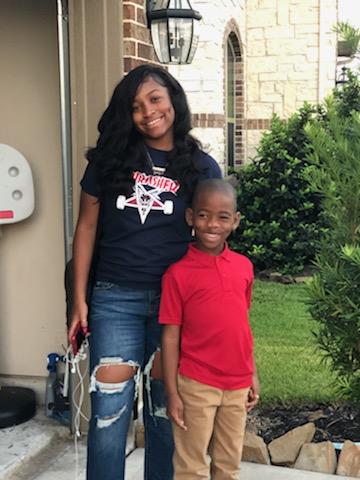 With a heart of gold and contagious laughter, please meet William Frazier, Hope For Three’s February Autism All-Star! William enjoys playing basketball, baseball, and soccer and playing games on his X-Box 360. His absolute favorite game to play is “Just Dance,” as he loves to perform routines from the game for his family or hold dance competitions.

At eighteen months old, William’s mother noticed that he was not meeting all his developmental milestones and immediately enrolled him in Speech Therapy. He was later diagnosed with Autism at three years old after demonstrating difficulty with behavioral skills and functioning in a daycare or classroom environment. His parents credit his incredible progress to the many amazing teachers that helped nurture his growth and displayed fantastic patience and persistence related to his academic development. One would never know that William had a delay in his speech as he now holds lengthy conversations with anyone he encounters.

William is now nine years old and lives in Rosenberg, TX, with his parents, older sister Jailyn, and younger sister Rylee. He and his family are very close and spend lots of time together hanging out, watching tv and movies, and playing games. William says that his Dad is his hero because he is always there for him and helps take great care of him. He would like to be a principal when he grows up to help children who get into trouble get back on track. His inspiration is his mom, who is an assistant principal at Velasquez Elementary School.

William is currently a third-grade student at Cora Thomas Elementary School in Lamar CISD, where he is noted as being super intelligent and inquisitive. He is a hard worker and is on the A/B Honor Roll. His favorite things to do at school are play math games on the computer and read non-fiction stories to his class. He loves his teachers and friends very much and shows excellent leadership skills by leading the morning calendar time, assisting his teachers with Zoom lessons, and cleaning up the classroom. Last school year, William was awarded the “Thomas Tiger Character Counts Award” for his grade level for demonstrating great character at school and being a role model for his classmates.

William is loved by all who meet him and is extremely kind and always concerned for others’ feelings. He goes out of his way to express his love and affection for those closest to him. He is an amazing boy full of love and persistence and can do anything he puts his mind to regardless of the challenge. This is what makes William an Autism All-Star.